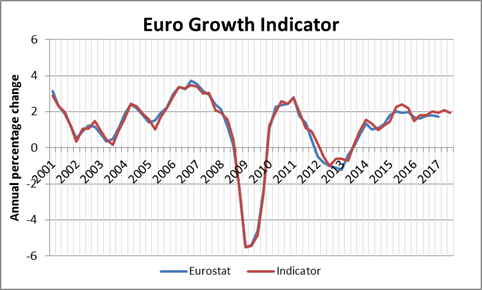 The Q2 estimate has been revised quite substantially from last month, but this is mainly due to an error in last month's calculation (it should have been 0.75 instead of 0.47 announced then).

The robust GDP growth in the second quarter mainly stems from an improvement in the economic sentiment of the industrial sector. This factor has constantly raised the indicator value during last months, thus contributing to the improving economic outlook in the euro area. Also the USD-euro real exchange rate and sentiment in household sector contributed modestly positively to the indicator value for the second quarter. On the other hand, a slightly weakened sentiment in the construction sector, which enters the estimation with a long lag of 5 quarter, fractionally reduced the indicator value. The slowdown of GDP growth in the third quarter mainly stems from a decrease in the economic sentiment of the industrial sector, and to a small extent, a slightly weakened sentiment among households.