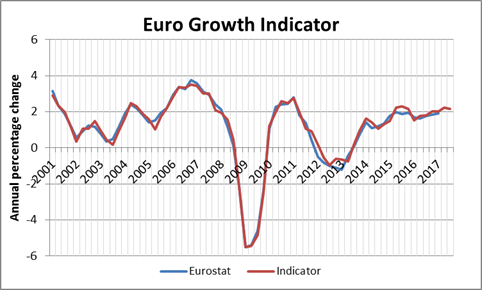 The euro area economy is expected to continue to grow at solid rates in the summer semester of 2017, following the acceleration of economic activity registered in the first quarter of the year. According to the July Euro Growth Indicator calculated by the EUROFRAME, GDP growth is forecast at 0.7 per cent growth in the second quarter and 0.4 per cent in the third quarter, respectively. The Indicator estimates have been upwardly revised slightly from last month’s estimate, especially for the third quarter where the growth estimate has been raised from 0.3 to 0.4 percent as a result. On a year-over-year basis this would translate into growth of 2.2 percent in both quarters, up from 1.9 percent in the Eurostat estimate for the first quarter.

The current strong growth momentum is mainly due to bullish sentiment in the industrial sector, and a gradual moderation in this component of the indicator is the major reason for the slower (though still solid) GDP growth expected for the third quarter. A small positive contribution is also coming from the movements of the euro exchange rate (lagged by 6 months). Household sentiment 3 months ago and construction survey results, which enter the indicator with a long lag of five quarters, currently have only limited impact on the indicator.

All in all, the July Euro Growth Indicator confirms that the recovery in the euro area economy remains on track despite the additional uncertainty associated with political events such as the decision of the UK to leave the EU and the possibility of substantial policy changes by the new US administration. It should be noted, however, that for quite some time now there has been a certain disconnect between economic sentiment indicators and hard economic data. As a result, the Euro Growth indicator, which heavily uses sentiment indicators in its calculation, in recent quarters tended to overestimate growth in the euro area relative to the Eurostat published data, although the direction of the economy is clearly matched and recent Eurostat revisions have reduced the gap.