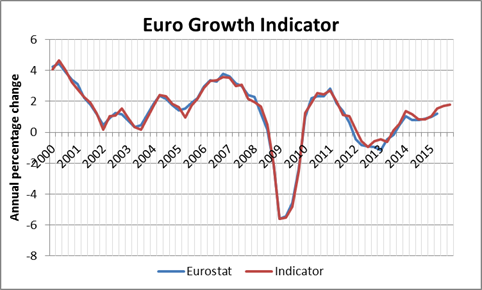 According to the September EUROGROWTH indicator, growth in the euro area will pick up to a rate of 0.6 per cent in the third quarter of 2015. The indicator result was unchanged from the estimation in August. The first estimation for the fourth quarter predicts only a minor deceleration to 0.5 per cent, confirming the solid upward momentum. If realized, we would see the highest quarterly growth rate since the first quarter of 2011. The year-on-year growth rate is expected to accelerate to 1.7 and 1.8 per cent, respectively, up from the 1.2 per cent growth published by Eurostat for the second quarter. Although this rate is still moderate by historical standards, it would be the highest rate of growth in four and a half years.

The acceleration of growth in the third quarter is mainly driven by the lagged effect of the strong devaluation of the euro in the beginning of this year. Confidence in the industry and the household sectors continues to support growth, although slightly less pronounced than in the first quarter. A negative contribution, by contrast, comes from a deterioration in the construction surveys which affect growth estimates of the EUROFRAME indicator with a long lag of more than one year. In the fourth quarter, the drivers of growth are changing: The contribution of the exchange rate to growth is vanishing, industry and consumer surveys indicate a less bullish attitude, but construction provides a significant boost to growth.

For the time being, the EUROFRAME indicator suggests that the recovery of the euro area economy will continue at an accelerated pace going forward. The recent deterioration of economic sentiment, however, flashes a warning light and indicates that the risks for the recovery may have risen. The apparent further slowdown in the emerging economies, especially in China, and a stronger euro could lead to increased uncertainty export growth and weigh on investment. Reduced prices and increased volatility in the stock market also indicate that risks for the outlook have risen. On the other hand, with the renewed decline of oil prices consumers will benefit from another gain in terms of trade. Due to a more clouded outlook and stronger deflationary forces a normalization of monetary policy may be further away than previously thought, and even more monetary stimulus from the ECB may be the result, which would support the continuation of the recovery going forward.