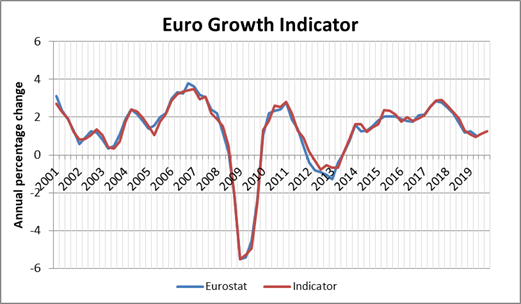 The indicator suggests that euro area growth will accelerate slightly in the fourth quarter of 2019, implying a quarterly growth rate of 0.4 for the monetary area. This would convert into a 1.3 per cent year-on-year GDP growth, a slight improvement from the third quarter’s yearly growth rate. Hence according to the Indicator, the growth would remain robustly positive in the next two quarters in the euro area.

The fourth quarter’s GDP growth is supported by the same factors that were relevant in the third quarter as well. Thus, growth is given a small push by the positive sentiment in the construction sector and developments in the real euro per dollar exchange rate. The sentiments in the industrial and household sector continue to contribute negatively to the fourth quarter indicator’s value, but importantly, the strongly negative effect coming from the industrial sector sentiment is declining. This would explain most of the acceleration in GDP in the final quarter of this year. Nevertheless, while the improvement stems from only one month’s observation, we note that the positive interpretation of the data may change with the next month’s data also available.

All in all, the Indicator suggests that euro area growth stays positive in the next two quarters even though particularly the third quarter’s growth is expected to be sluggish. Nevertheless, the Indicator suggests that growth will accelerate in the fourth quarter to a quarterly rate of 0.4 per cent, slightly supported by the sentiment in the construction sector and developments in the real euro per dollar exchange rate combined with a smaller negative contribution stemming from the industrial and household surveys. However, it is only the last month’s observation in the survey that depicts an improvement in the industrial sector sentiment, hence one should be cautious when reading these estimates.