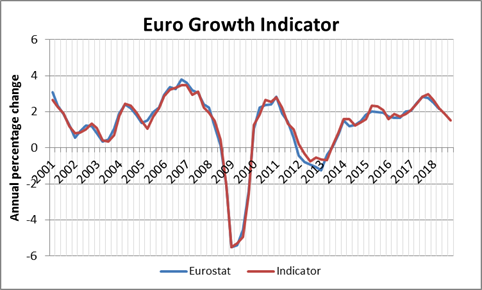 The Euro Growth Indicator, calculated by the Euroframe group in September 2018, suggests that euro area GDP growth in the third quarter of 2018 is in line with the growth estimates produced by Eurostatrate for the first and second quarters of the year. According to the Indicator, quarter-on-quarter GDP growth in the euro area would be 0.4 per cent in the third quarter. This would convert into a 1.9 per cent year-on-year growth rate, a growth rate which is 0.3 percentage points below  Eurostat’s growth estimate for the second quarter of 2018. The first indicator estimate for the fourth quarter suggests that euro area growth will slow down slightly towards the end of the year, implying a quarterly growth rate of 0.3 per cent for the final quarter. This would convert into a 1.5 per cent year-on-year GDP growth, a growth rate well below the numbers seen during last two years.