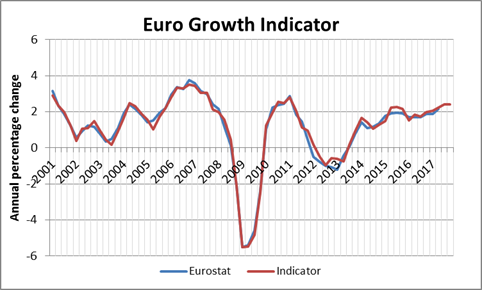 The Euro Growth Indicator, calculated by the Euroframe group in September 2017, shows that euro area GDP growth will remain strong during the third quarter of 2017. The indicator suggests that quarter-on-quarter GDP growth in the euro area would be 0.65, implying that the growth in the third quarter would be quite as strong as it was in the second quarter, according to the flash estimate produced by Eurostat (it came in slightly below the latest indicator estimate for Q2 of 0,7 percent). The Euro Growth Indicator also implies a year-on-year growth rate of 2.40 per cent for the euro area third quarter.The first estimate of the indicator for the fourth quarter of 2017 suggests steady quarterly growth of 0.60 per cent. This would convert to 2.40 per cent annual GDP growth for the fourth quarter.

To conclude, the Euro Growth Indicator for the third and fourth quarters gives no indication of an imminent slowdown of the improved growth momentum in the euro area, suggesting that the accelerated pace of expansion which started in the second half of 2016 may continue into 2018.