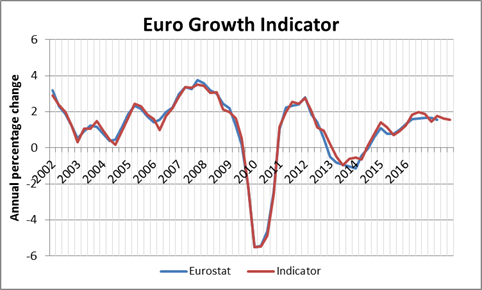 Rising pessimism in the euro area

According to the Euro Growth Indicator calculated by the EUROFRAME group in early September, euro area real GDP should grow by 0.4 both in the third and fourth quarters of this year. The estimate for the third quarter has been revised downwards (–0.2 percentage point, from 0.55 to 0.36 pc), while the estimate for 2016Q4 is the first one run with the indicator. On a y-o-y basis, these forecasts imply a stable momentum, 1.6 percent both in 2016Q3 and 2016 Q4.

The downward revision in GDP growth prospects in 2016Q3 reflects mainly the change in sentiment in the industrial sectors which affects the indicator coincidentally. While industrial confidence fluctuates around a flat trend since late 2013 (one reason for the rather sluggish recovery in the euro area), August survey results bring back the confidence indicator to the low limit of the range. The contribution of the industry survey for 2016Q3 turned from positive in July to zero in August. Both the sentiment in the industry and in households’ surveys decreased in August at the euro area level. The Brexit vote probably generated some immediate pessimistic sentiment among firms in the euro area, although the economic consequences of such an event regarding real activity cannot be fully effective at that stage, two months after the referendum. A correction of this bad mood may happen in the coming months, leading to upward revisions of the indicator forecasts in 2016Q3 and 2016Q4.

The other contributions of the variables entering the indicators are broadly positive in 2016Q4. The positive contribution of the construction survey reflects better developments in the sector started one year ago. The contribution of the consumer survey will turn positive, whereas the impact of the real euro/dollar exchange rate should turn negative, reflecting, with a lag of two quarter, the – moderate – appreciation of the euro during spring months.