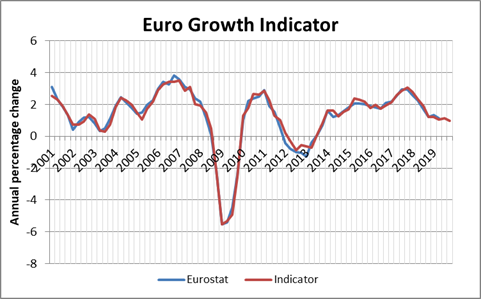 Weakness in industry weighs on growth in the euro area

Euro area growth will remain sluggish until the end of this year, according to the October Euro Growth Indicator calculated by the EUROFRAME group of economic research institutes. GDP is forecast to increase by only 0.2 per cent both in the third and the fourth quarter of 2019, following the same rate of growth registered by Eurostat for the second quarter of 2019. On a year-over-year basis, growth would remain at around 1 percent per cent in both quarters, a slight further deceleration from the 1.2 per cent growth rate recorded in the fourth quarter 2018.

The Indicator estimate continues to be dragged down by a substantial negative contribution from the industrial sector, and the deterioration of confidence in the industrial sector in September is largely responsible for the downward revision of the Euro Growth Indicator for the fourth quarter from 0.4 percent last month to the current estimate of 0.2 percent. At the same time, consumer confidence (lagged by one quarter) is slightly improving and almost neutral with respect to the GDP growth rate in both quarters, while the contribution of construction survey results, which impact on the Indicator with a long lag of five quarters, remains positive although at a lower level than in the first half of the year. A small positive contribution is also coming from the real euro/dollar exchange rate, which enters the indicator calculation with a lag of 2 quarters.

The negative momentum in industry is particularly strong in Germany, where the industrial sector is in recession, with manufacturing output in decline since mid-2018. At the same time, manufacturing production in the euro area outside Germany has been almost flat. The downturn in German industry is broad-based, but particularly pronounced in the automotive sector. While the steep decline of car production in the second half of 2018 can partly be explained by problems with the implementation of a new European emission test procedure, the absence of a significant recovery in the course of this year suggests that problems have deeper roots. The decline in world trade and the marked deceleration of investment on a global basis have contributed to the relatively poor performance of the German industry, given its high export share and its bias towards investment goods.

All in all, the Euro Growth Indicator suggests that the euro area economy will remain in the doldrums for the remainder of the year. So far increasing construction and stable sentiment on the consumer side, which is supported by a robust labour market and increasing real incomes, keep the economy on a moderate upward path. However, the longer the weakness in industry continues, the higher the risk that the rest of the economy will be infected. So far, the economic outlook remains clouded given the lingering threat of trade conflict with the US, slower growth in China weighing on the demand for manufacturing goods and raw materials, and persistent uncertainties around Brexit.