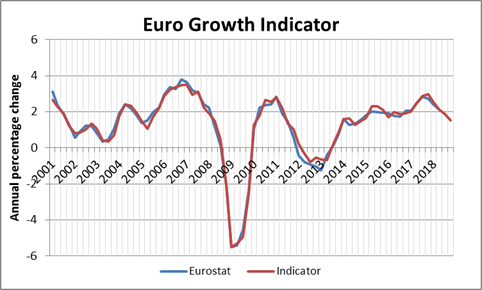 Growth in the euro area decelerates

Growth in the euro area is expected to gradually slow down further towards the end of the year. After the strong economic expansion experienced through 2017, growth has already moderated markedly in the first half of this year, from around 0.7 per cent per quarter to 0.4 per cent. According to the October Euro Growth Indicator calculated by the EUROFRAME group of economic research institutes, with only marginal revisions from the September release, growth in the third quarter will again come in at 0.4 per cent and decelerate further to 0.3 per cent in the fourth quarter. On a year-over-year basis, growth would decline to 1.9 per cent and 1.5 per cent in Q3 and Q4, respectively, down from 2.1 per cent in the second quarter and 2.7 per cent in the fourth quarter of last year.

The continued gradual decline of the Indicator growth estimate in the fourth quarter reflects a further deterioration of sentiment in the industrial sector, which affects the Indicator coincidentally. Construction survey results, which impact on the Indicator with a long lag of five quarters, by contrast contribute positively to the indicator estimate, especially in the third quarter. Also consumer confidence (lagged by one quarter) has improved and has a moderate positive impact on the indicator in both quarters. The exchange rate, which enters the Indicator with a lag of two quarters, has a slight negative contribution in the third quarter but a small positive one in the fourth quarter.

All in all, the October 2018 Euro Growth Indicator suggests that the euro area economy continues to lose steam. With growth momentum already substantially reduced, the risk that the euro area economy stalls in response to negative shocks seems to have increased. Potential sources of negative surprises abound, including a further escalation of international trade conflicts, failure to agree on an orderly exit of Britain from the European Union, or a substantial further increase in oil prices as a result of the implementation of sanctions on Iran.