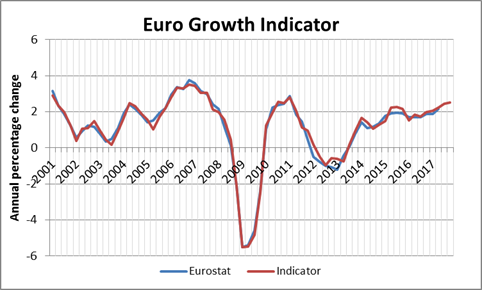 Economic growth in the euro area will continue at a robust pace at least until the end of this year, according to the October Euro Growth Indicator calculated by the EUROFRAME group of economic research institutes. GDP is forecast to grow by 0.7 per cent in both the third and the fourth quarter of 2017. The Indicator estimates have been revised upward from September marginally for Q3 and by almost 0.1 percentage point for Q4 suggesting that economic momentum is carrying into the final quarter of the year.  On a year-over-year basis growth would accelerate to 2.4 per cent and 2.5 per cent, respectively, up from 2.2 per cent in the current Eurostat estimate for the second quarter.

The current strong growth is mainly due to bullish sentiment in the industrial sector. While this component of the indicator is losing steam in the fourth quarter and the real euro/dollar exchange rate (lagged by 6 months) is starting to impact negatively in response to the appreciation earlier in the year, a more positive household sentiment, which enters the indicator with a lag of 3 months, is pushing the indicator up. The construction survey results, which enter the indicator with a long lag of five quarters, currently only have a small impact on the indicator.