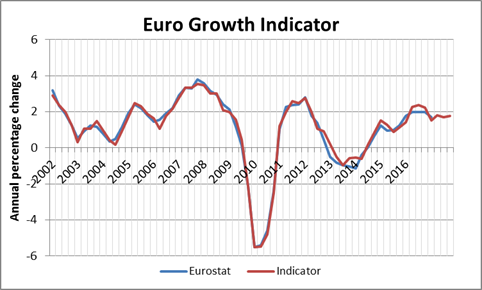 Expansion in the euro area to continue at moderate pace

The economic expansion in the euro area seems to have found traction again, according to the October estimate of the Euro Growth Indicator calculated by the EUROFRAME group, after last month's estimate had signalled a more temperate assessment of the current economic momentum. The indicator forecasts 0.4 per cent growth in the third quarter accelerating to 0.5 percent in the fourth quarter of this year. The indicator estimate for Q3 has been revised up from 0.36 per cent calculated in September to 0.45 per cent in October, the estimate for Q4 has increased from 0.37 to 0.49 per cent. On a y-o-y basis this would translate into growth of 1.7 and 1.8 per cent in Q3 and Q4, respectively, which is in the range of the 1.8 per cent growth rate registered by Eurostat for 2016Q2.

The upward revision in the quarterly growth estimates is mainly due to an improved economic sentiment in the industrial sector. The acceleration of growth from the third to the fourth quarter is reflecting an improvement in household confidence which is entering the indicator with a lag of one quarter. Slightly better assessment of the economic situation in the construction sector is also pushing the indicator up (with a lag of five quarters), whereas the contribution of the exchange rate has a slightly negative impact.

All in all, the October Indicator suggests that the negative fallout from Brexit decision that seems to have weighed on economic sentiment in September has been less pronounced than expected. At the same time, the absolute value of the individual elements of the indicator is currently rather small. Thus technically the constant and the lagged GDP growth rate are dominating the Indicator’s October estimate, resulting in a growth rate close to the recent trend and slightly above what is widely regarded as being the current growth rate of potential output in the euro area. This would imply a continuation of the modest economic upswing that has been evident in the euro area economy over the past 1½ years or so.