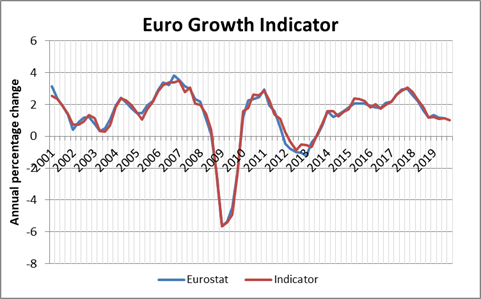 Euro area GDP expected to continue to grow by 0.2 per cent only in the fourth quarter of 2019

Euro area GDP grew by 0.2 per cent in the third quarter of 2019, according to the flash estimate released by EUROSTAT on 31 October 2019. This is in line with the Euro Growth Indicator estimate calculated by the EUROFRAME group of economic research institutes last month.

On a year-over-year basis, euro area GDP growth would however decelerate from 1.15 per cent in the third quarter of 2019 to 1 per cent in the last quarter. Risks continue to be tilted to the downside, although two major risks have receded in recent weeks. First, the US did not raise further tariffs on Chinese goods in October, contrary to what had been planned in the summer. But it remains to be seen if the US and China reach an agreement on trade and related issues in the coming months. Second, following the agreement reached on Brexit by the UK government and the EU, the official deadline for the UK to leave the EU has been delayed from 31 October 2019 to 31 January 2020. However, here also, if uncertainties around Brexit are currently smaller than they were a few weeks ago, they will persist, at least until the UK general elections due to be held on 12 December. Even if recent indicators, especially in the manufacturing sector, suggest a less deteriorated outlook, euro area output growth is likely to remain sluggish in the coming months.