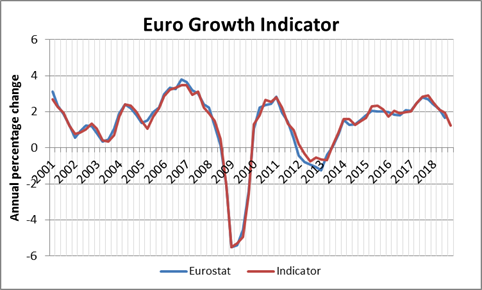 According to the preliminary flash estimate released on 30 October by EUROSTAT, euro area GDP grew by a mere 0.2 per cent in the third quarter of 2018. This is well below the 0.4 per cent growth anticipated by the EUROGROWTH indicator calculated by the EUROFRAME group of economic research institutes as well as by a large number of forecasts. Not all EMU countries have released so far their preliminary GDP estimate, but with French GDP having grown by 0.4 per cent, Italy by 0 per cent and Spain by 0.6 per cent, the euro area figure published by EUROSTAT implies GDP growth decelerated elsewhere in the euro area. This is likely to have been the case in Germany, where industrial production growth decreased sharply in the summer, and more especially in the automotive sector which was negatively affected by the implementation of the new EU-wide WLTP (Worldwide Harmonised Light-Duty Vehicle Test Procedure). However, this effect is expected to be temporary and to be followed by a rebound in car production towards the end of the year and in early. Such temporary effects cannot be perfectly captured by leading indicators based on survey data, but may well amount in the third quarter of 2018 to close to 0.2 per cent of euro area GDP.

On a year-over-year basis, euro area GDP growth would come down from its previous peak of 2.7 per cent in the last quarter of 2017 to 1.2 per cent only in the fourth quarter of 2018. On top of the uncertainties already there for several months including those at the world level related to international trade tensions, geopolitical risks maintaining oil prices at around 80 dollars per barrel Brent, and the uncertainties about a Brexit deal being reached before the end of the year, downside risks have been mounting more recently in the euro area as the presentation of the Italian budget led to a rise in interest government bonds’ rates. Downside risks to euro area short-term growth seem to have increased in the recent past.