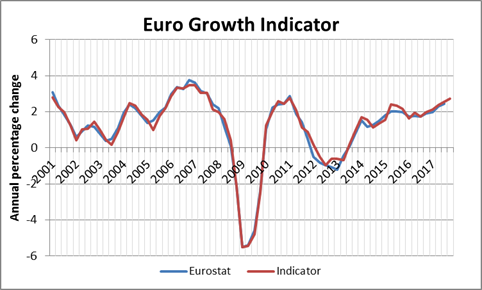 According to the preliminary flash estimate released by EUROSTAT on 31 October, euro area GDP grew by 0.6 percent in the third quarter of 2017. This is slightly below the estimate of 0.7 percent produced by the Euro Growth Indicator calculated by the EUROFRAME group of economic research institutes. According to the Euro Growth Indicator’s latest estimate, euro area growth will further accelerate to 0.9 percent in the fourth quarter.

This estimate is 0.2 percent higher than last month estimate. The reason for the upward revision comes from a more buoyant industrial sentiment, as signalled by survey data results for October. The industrial confidence indicator has now reached its previous peaks from early 2006 and early 2010, when euro area quarterly GDP grew by close to 1 percent.

Although one has to be cautious as the Euro Growth Indicator relies mainly on survey data available up to October, euro area GDP growth momentum seems likely to remain robust until the end of the year. On a year-over-year basis this would translate into GDP growing by 2.7 percent in the fourth quarter, up from 2.5 percent in the third quarter according to the latest Eurostat estimate.

Disclaimer: With EUROSTAT having shortened its publication delays for the preliminary flash estimates (now released at t+30), the Euro Growth Indicator calculated by EUROFRAME this month provides a one-quarter ahead forecast only.