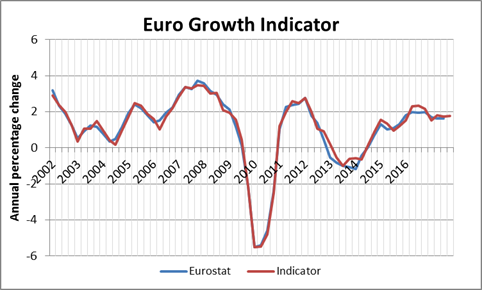 The Euro Growth Indicator, calculated by the Euroframe group in November 2016, suggests that euro area GDP growth will accelerate in the fourth quarter of 2016. The acceleration is manifested both in comparison to the third quarter growth and to the previous estimate calculated in October. According to the indicator, quarter-on-quarter GDP growth in the euro area would accelerate to 0.6 per cent in the fourth quarter, up by 0.1 percentage points from the October’s indicator value.  This implies a year-on-year growth rate of 1.8 per cent, a relatively good number when compared to the recent years’ performance of the monetary area.

The acceleration of GDP growth in the fourth quarter mainly stems from the improvement of economic sentiment in the industrial sector, a fact that was also prevalent last month. The household and construction surveys also contribute positively to the Indicator, albeit rather modestly. By contrast, the USD-euro real exchange rate contributes negatively to Indicator’s estimate for the fourth quarter GDP growth.

All in all, the November Indicator still seems relatively immune – or only very little affected – to uncertainty caused by the Brexit vote. The third and the fourth quarter GDP growth implied by the Euro Growth Indicator are estimated to remain stable and relatively strong, encouraged by the good sentiment in the industrial sector.