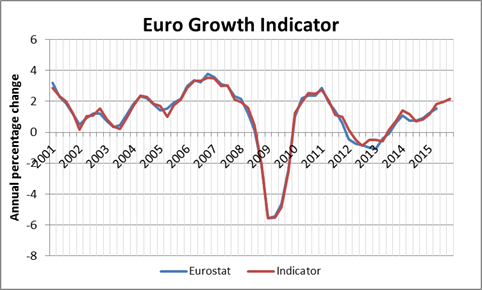 Growth in the euro area will accelerate in the second half of this year, according to the November EUROGROWTH indicator. GDP is expected to pick up from a rate of increase of 0.4 per cent, reported by Eurostat for the second quarter 2015, to 0.7 per cent in the third quarter and continue to grow at that rate in the final quarter. The forecast for the third quarter has been confirmed while the fourth quarter estimate has been revised up by 0.1 percentage point from October. On the back of this acceleration, which would be the best performance in 4 ½ years, year-on-year growth would rise to 2.0 per cent and 2.3 per cent in Q3 and Q4, respectively, and annual growth in 2015 would come in at 1.7 per cent.

The acceleration of growth in the third quarter of 2015 is driven by the lagged effect of the strong devaluation of the euro against the dollar which started mid-2014 and continued into 2015. The positive contribution of the results of the consumer surveys to the growth estimation, by contrast, is slightly lower than in the previous quarter. In the fourth quarter, the effect of the exchange rate on growth strongly declines to almost neutral, as the euro did not depreciate much further vis-à-vis the dollar during spring and summer. The continued strong growth of GDP estimated for the fourth quarter is primarily due to a large swing in the results of the construction surveys that impact on the indicator with a long lag of 5 quarters.

The outlook for the euro area remains bullish for the time being, according to the EUROGROWTH indicator, but the foundation of the upturn still seems fragile. Much of the momentum is probably due to external shocks that may have run their course, namely the exchange rate devaluation and the decline in oil prices. It remains to be seen whether this stimulus will successfully trigger a sustained acceleration in domestic demand, which would be necessary to keep growth steady given the clouded outlook for exports to the emerging economies. On the one hand, there are elements which support the recovery, including a gradual improvement in employment, less drag from fiscal policy and strong monetary stimulus from the ECB, which is not likely to be reduced any time soon. On the other hand, continued pressure for adjustment in a number of countries, uncertainties with respect to the external environment, and the economic fallout of the political crisis around the massive inflow of refugees limit the upside to the outlook.