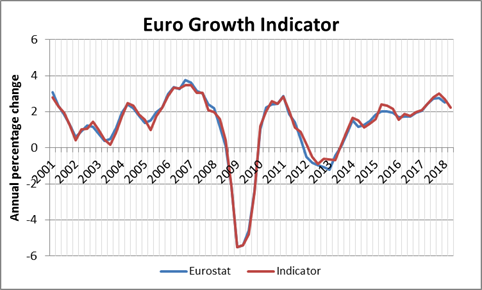 Euro area GDP is expected to grow by around 0.4 per cent per quarter in the second quarter of  2018, according to the latest estimates of the Euro Growth Indicator calculated by the EUROFRAME group of economic research institutes. Euro area GDP would thus grow at a similar pace as in the first quarter of 2018, according to the preliminary flash estimate released in early May by Eurostat for the first quarter of 2018. As compared to last month, the Indicator estimate for the second quarter 2018 is however revised upwards by 0.1percentage point due to the stabilisation in the industrial survey component in April, after two months of decline since the peak reached in early 2018. On a year-over-year basis, euro area GDP growth would decelerate from 2.7 per cent in the first quarter of 2018, to 2.2 per cent in the third quarter.

Euro area GDP growth thus seems to have peaked in the fourth quarter of 2017, at close to 2.8 per cent on year-over-year basis, according to EUROSTAT figures, and business survey data do not currently suggest any rebound of growth in the first half of 2018.

Disclaimer: With EUROSTAT having shortened its publication delays for the preliminary flash estimates (released at t+30), the Euro Growth Indicator calculated by EUROFRAME this month provides a one-quarter ahead forecast only.