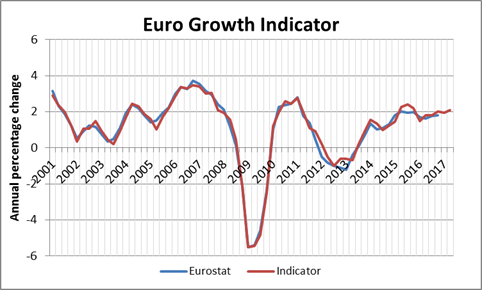 According to the latest estimate of the Euro Growth Indicator calculated by EUROFRAME, the euro area will grow by 0.7 per cent growth in the first quarter 2017 and by 0.4 per cent in the second quarter. For the last quarter of 2016, our indicator based mainly on business surveys data has suggested stronger GDP growth than in the preliminary EUROSTAT release. This could also be the case with the first preliminary estimate of the first quarter of 2017 to be released by EUROSTAT on May 3. As concerns the second quarter of 2017, the Euro Growth Indicator’s estimates have been revised very marginally upwards from early April (by 0.03 percentage point).  On a y-o-y basis GDP growth would be close to 2 per cent in Q1 and Q2.

The slowdown expected in the second quarter comes from a deterioration of the sentiment in the industrial sector, which has a slightly negative contribution to GDP growth following two quarters of substantial positive contribution. Construction survey results, which enter the indicator with a five-quarter lag, also contribute to reduce slightly GDP growth. The contribution of household surveys will remain close to zero, whereas the contribution from the real euro-dollar exchange rate, which plays with a two-quarter lag, will be slightly positive.

Business survey data suggest that euro area growth will decelerate in the second quarter, in a context of still high political uncertainties across Europe and more widely at the world level.