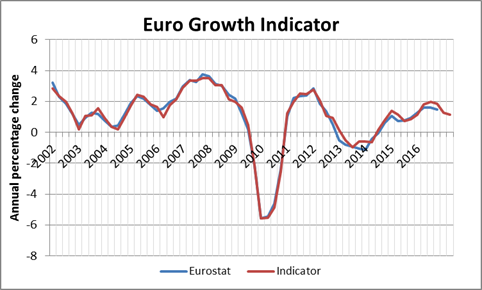 The Euro Growth Indicator calculated by the EEUROFRAME group in May 2016 suggests a continuation of moderate GDP growth in the first half of 2016. In quarter-on-quarter terms, the euro area GDP would grow by 0.3 per cent in the first two quarters of 2016 as it did in the third and fourth quarters in 2015. The stable quarterly growth rates forecast for the first two quarters of 2016 correspond to declines of the year-on-year rates to 1.3 and 1.2 per cent from the 1.6 per cent growth in the fourth quarter in 2015.

The Indicator results are unchanged from the previous estimation in April. The household and industrial survey factors continue to be the main drivers of the growth. While the household survey continues to show strong positive contributions, that of the industrial survey turned strongly negative in the first quarter of 2016 dwindling to half in the second quarter. Obviously, higher real disposable incomes as a result of lower interest rates, low prices and rising employment provide strong tail winds to consumption. In case of industrial surveys, which affect the indicator coincidentally, the financial turbulence around the year-end related to the increased uncertainty over Chinese growth prospects seem to have deteriorated both expectations and contributions.

The construction survey, which affects the Indicator with a 5-quarter lag, supports the growth estimate in the first quarter, but the effect fades out in the second quarter. The Indicator is very sensitive to the changes in price competitiveness, measured with the real exchange rate with a lag of two quarters. The contributions have, however, been quite modest since the fourth quarter of 2015.

The Indicator misses the pick-up in euro rea growth to 0.6 per cent (QoQ) in the first quarter, apparent in the recently published Eurostat flash estimate. This may suggest a new moderation of GDP growth after the first quarter. In terms of the model, growth will moderate in the second quarter if the industry surveys estimated contribution does not improve.

All in all, the Indicator predicts continuing modest growth in spite of many favourable tail winds. Increased uncertainty relating to Chinese growth, Brexit and deflationary developments in the Euro area have counterweighted the positive factors and continue to pose risks for growth.