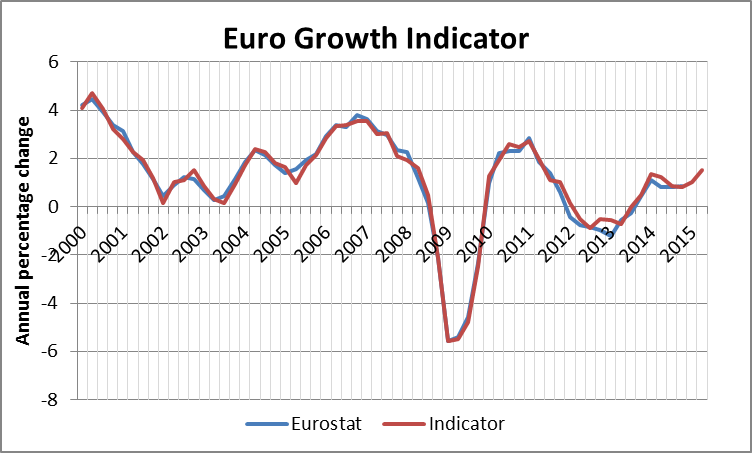 Euro area growth is finally gaining some strength in the first half of this year, according to the EUROGROWTH Indicator calculated by the Euroframe group in May 2015. As an indication of improvement from the slow growth in the summer and autumn quarters in 2014, the growth rate of 0.3 per cent published by the Eurostat equals the quarter-to-quarter growth estimate for the fourth quarter. The growth rates forecast for the first and second quarters of 2015 inch up by 0.1 and 0.3 percentage points from the fourth quarter to 0.4 and 0.6 per cent, respectively. The first quarter estimate is unchanged from the April estimation, while the second quarter estimate is 0.1 percentage point higher than the previous prediction. The respective year-on-year growth rates for the first two quarters in 2015 are 1.0 and 1.5 per cent, respectively.

The improving outlook for the first half of 2015 rests largely on improvements in consumer confidence and in international price competitiveness. Consumer confidence benefits from the cheaper energy due to the sharp decline of oil prices since June 2014, although a weakening of the euro has reduced the price effect in euros. The growth impact of improved competitiveness is captured by the USD-euro real exchange rate with a lag of two quarters. Consequently, the weakening of the euro vis-à-vis the USD since March 2014 has supported euro area growth since the beginning of 2015. Industrial survey data that affects the indicator coincidentally was negative from the second quarter of 2014 up to the first quarter of 2015, but turned positive in the second quarter, improving the growth estimate for the quarter.

All in all, the Eurogrowth indicator predicts a strengthening growth for the euro area in the first half of 2015. The massive unconventional bond-purchase program by the ECB, announced on January 22, may have affected industrial expectations positively, adding to the support provided by the decline in the oil price and the weakening of euro. On the other hand risks prevail. including the rising uncertainty relating to the threatening default of Greece and a possible adverse development of the crisis in Ukraine which could weaken industrial confidence and GDP growth in the Euro Area in the coming months.