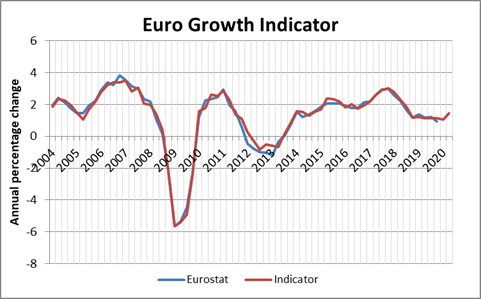 The March Euro Growth Indicator, calculated by the Euroframe EUROFRAME group in March, suggests that the quarterly growth rate of euro area GDP would be close to 0.6 per cent in the first quarter of 2020. This would imply a markedly accelerating growth from the fourth quarter, when growth was 0.1 per cent, according to the flash estimate provided by Eurostat. The Indicator implies that the year-on-year growth rate would be 1.0 per cent in the first quarter of 2020. The Indicator, however, is based on February sentiment indicators that do not capture yet the negative economic effects induced by the spread of the coronavirus that are currently unfolding.

The Indicator suggests that euro area growth would stay robust in the second quarter of 2020, implying another 0.6 per cent quarter-on-quarter growth for the euro area. This would convert into growth of 1.5 per cent year-on-year GDP growth in the second quarter. This looks like a very optimistic scenario amid the news of coronavirus-induced negative effects on firms’ supply chains, tourism and world trade and potentially domestic demand.

Sentiment indicator values until February in both the industrial and the household sector as well as the developments in the exchange rate also support second quarter GDP growth. Sentiment in the construction sector, instead, contributes slightly negatively to the second quarter Indicator value. Yet it is the improvement in the industrial sector sentiment which explains the greatest share of the strength of the Indicator estimate for euro area GDP growth in the first and second quarters of this year.

It is, however, clear that the Indicator misses the worrying developments brought about by the spread of the coronavirus. In China, where the epidemic started, February sentiment indicators have declined dramatically signalling a substantial slowdown of the economy, and given the progressive spread of infections across Europe, significant negative effects on economic activity in the euro area seem inevitable. This will almost certainly be reflected in a deterioration of economic sentiment in March and should lead to a substantial downward revision of the Euro Growth Indicator estimates for growth in April.