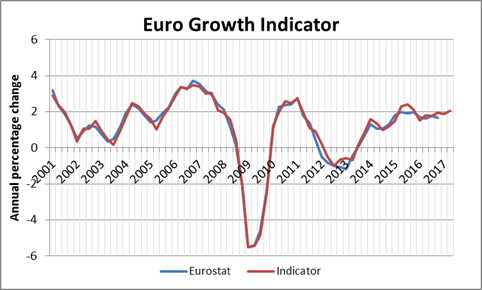 A steady growth path in the near term

The Euro Growth Indicator, calculated by the Euroframe group in March 2017, suggests that euro area GDP growth will remain robust during the first half of 2017. According to the indicator, quarter-on-quarter GDP growth in the euro area would accelerate to 0.7 per cent in the first quarter of 2017, unchanged from the February estimate. This suggests that quarter-on-quarter GDP growth in the euro area would accelerate by 0.3 percentage points when compared to the flash estimate for the last quarter of 2016, produced by Eurostat. The Euro Growth Indicator for the first quarter of 2017 implies a year-on-year growth rate in the monetary area of 1.9 per Cent. The first estimate of the indicator for the second quarter 2017 suggests a quarterly growth of 0.5 per cent for the euro area. Despite indicating a lower quarter-on-quarter GDP growth, annual GDP growth would rise to 2.1 per cent.

The acceleration of GDP growth in the first quarter mainly stems from the improvement of economic sentiment in the industrial sector, a fact that also raised the indicator value for the last quarter of 2016. In the first quarter of 2017 there is also a positive contribution of the economic sentiment in the construction sector, which enters the indicator with a long lag of 5 quarters. The USD-euro real exchange rate contributes slightly positively to the indicator’s estimate as well.

Concerning the Euro Growth Indicator for the second quarter, sentiment in the industrial sector and the USD-euro real exchange rate remains supportive, whereas the construction sector contributes slightly negatively to indicator’s estimate.

The Euro Growth Indicator suggests a quarterly growth of 0.7 per cent for the fourth quarter of 2016, giving a more optimistic figure than the flash estimate produced by Eurostat, which was 0.4 per cent in quarter-on-quarter terms.

All in all, the first and the second quarter GDP growth implied by the Euro Growth indicator are estimated to remain relatively stable and strong, encouraged mostly by the good sentiment in the industrial sector. The first quarter growth is also boosted by improvement in the economic sentiment of the construction sector.