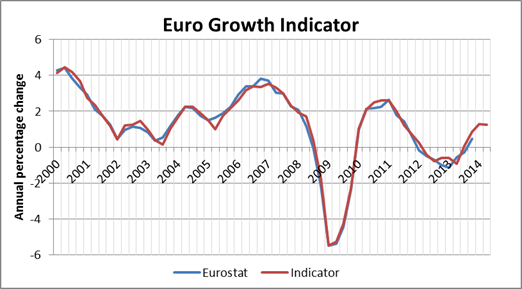 Outlook for the euro area: Sentiment better than the hard facts?

Kiel Institute for the World Economy
on March 4th, 2014

The outlook for the euro area economy has continued to improve in recent months. Real GDP started to increase in the second quarter of last year, and this upturn should continue in the first half of this year. According to the March estimate of the Eurogrowth indicator, we can expect increases of 0.5 and 0.3 percent in the current quarter and the second quarter of 2014, respectively.

The improvement comes mainly from the sentiment indicators which have shown some strength in recent months. Firms in manufacturing are still confident about the future although the optimism has lost some momentum, leading to the small deceleration of growth in the second quarter as predicted by the estimation results.  Another positive factor is the decline of pessimism in the household survey; the confidence has again a smaller negative contribution to the growth estimate. One reason is probably that the situation on the labor market has stabilized, although the recovery seems to be too weak to expect already a considerable decline of unemployment rates. But there are some signs of hope in some of the countries in a crisis. Other factors such as the results of the construction survey only showed minor changes with some volatility. A small negative contribution can be expected from the recent strengthening of the euro against the dollar.

All in all, the forecast looks a little more optimistic than the consensus forecast for this year. But some caution is warranted. The indicator is a little bit too positive compared to the actual outcome of the first GDP estimate for the final quarter of last year by Eurostat. Also, there are some indications that sentiment indicators have lost some of their power of explaining or predicting actual growth. A case in point is Germany where sentiment indicators are near their record levels, but growth has remained rather subdued recently.

Needless to say, risks remain for the outlook, also because of the crisis in the euro area. A new factor is the possible slowdown in some emerging economies as indicated by the turbulences on financial markets. Finally, nobody can predict the outcome of the crisis in Ukraine.