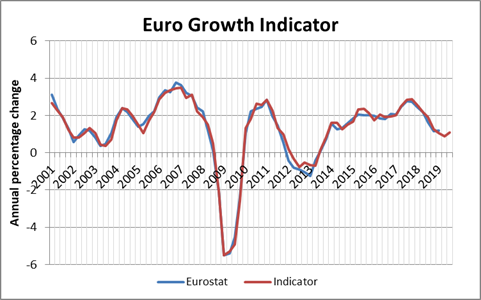 The Euro Growth Indicator, calculated by the EUROFRAME group in May, suggests that euro area GDP growth slows to a quarterly rate of only 0.1 per cent in the second quarter of 2019. This would imply a 0.3 percentage points deceleration from the first quarter’s quarterly growth rate, which was estimated to be 0.4 by the Eurostat. The indicator implies that the year-on-year growth rate would be 0.9 per cent in the second quarter of 2019, a rate which is 0.3 percentage points slower than the EUROSTAT estimate for a yearly growth in the first quarter of 2019.

The indicator suggests that euro area growth will regain some strength in third quarter of 2019, implying a quarterly growth rate of 0.3 for the monetary area. This would convert into a 1.1 per cent year-on-year GDP growth, a slight improvement from the second quarter’s growth rate. If materialized, this would alleviate fears of a further slow-down in growth in the euro area.

The third quarter’s GDP growth is supported by the same factors that were relevant in the second quarter as well. Thus, growth is given a push by the positive sentiment in the construction sector and developments in the real euro per dollar exchange rate. The sentiments in the industrial and household sector continue to contribute negatively to the third quarter indicator’s value, but their effect is declining.

All in all, the Indicator suggests that euro area growth stays positive in the next two quarters even though particularly the second quarter’s growth is expected to be sluggish. Nevertheless, the Indicator suggests that growth will accelerate in the third quarter to a quarterly rate of 0.3, supported by the sentiment in the construction sector and developments in the real euro per dollar exchange rate combined with a smaller negative contribution stemming from the industrial and household surveys.