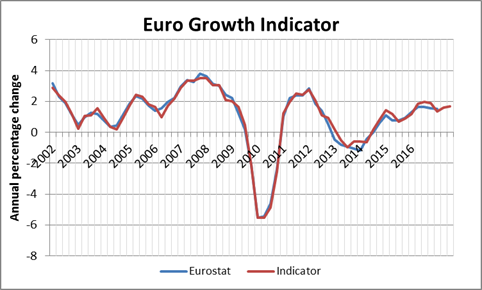 Steady but still moderate economic expansion in the euro area

In the summer half of 2016, the economic expansion in the euro area which started in 2013Q2 is expected to continue at a solid though moderate pace, according to the June estimate of the Euro Growth Indicator calculated by EUROFRAME. The indicator forecasts 0.4 per cent growth in both the second and third quarter of this year, following the 0.5 per cent growth rate published by EUROSTAT for first quarter 2016. The indicator estimate for Q2 has been revised up slightly from 0.3 per cent calculated in May, the estimate for Q3 is the first one available.  The q-o-q growth pattern would translate into a gradual acceleration of growth on a y-o-y basis from 1.5 per cent in the first quarter to 1.6 and 1.7 per cent in the second and third quarter, respectively.

While fluctuations of quarterly growth on aggregate are limited going forward, the forces behind the expansion are going to change. Had industry surveys that impact the indicator contemporaneously worked as a drag on growth in Q1, in Q2 and Q3 they are giving a major positive contribution. Conversely, the contribution to growth of household surveys (lagged by one quarter), which had been an important source of strength in previous quarters, is diminishing in Q2 and turning negative in Q3. The impact of the real exchange rate on growth remains almost insignificant as the euro-dollar rate has not moved substantially for almost one year now (the exchange rate enters the regression with a lag of 2 quarters). At the same time, the contribution of the construction survey, which enters the indicator with a long lag of 15 months and had been noticeably positive in the winter semester 2015/16, is becoming small.

All in all, the expansion in the euro area seems to maintain its path of a relatively sluggish recovery. For the time being, persistent impediments to growth related to the legacy of the crisis, such as deleveraging pressures and weaknesses in the banking sector in a number of countries, in combination with uncertainties associated with a fragile world economic environment prevent the substantial monetary stimulus and support from low commodity prices (even after their recent partial correction) to translate into a more dynamic upturn.