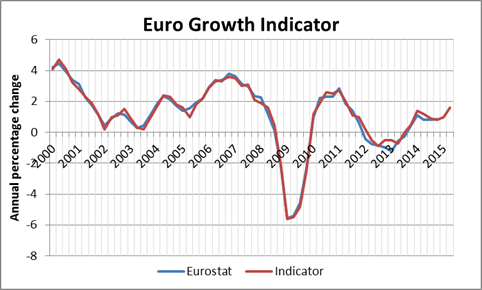 Recovery in the euro area is picking up speed

According to the June EUROGROWTH indicator, growth in the euro area will accelerate to 0.6 per cent in the second quarter of 2015 from 0.4 percent in the first quarter. The indicator result was unchanged from the estimation in May. The first estimation for the third quarter confirms the elevated growth momentum forecasting a further slight increase in the growth rate to 0.7 percent. On a year-on-year basis, the expansion is expected to strengthen to 1.6 per cent in the current quarter from the pace of growth of close to 1 per cent that was registered in the previous nine months. For the third quarter the indicator predicts a year-on-year growth rate of 2.1 percent, which would be the highest since early 2011.

In both quarters growth is supported by a significant contribution from the household sector. Household surveys (entering the estimation with a lag of one quarter) have improved significantly on the back of the gains in purchasing power due to lower energy prices and a gradual improvement in the labour market. Industrial confidence is also contributing positively to growth in both quarters, although the support from this side is diminishing in the third quarter. At the same time, however, the positive impact on growth from the euro/dollar exchange rate (lagged by 2 quarters) is increasing significantly reflecting the substantial devaluation of the euro. By contrast construction surveys, which affect growth estimates of the EUROFRAME indicator with a long lag of more than one year, currently exert a moderate dampening impact on GDP estimates.

All in all, the EUROFRAME indicator suggests that the euro area economy remains on a recovery track for the time being. Lower oil prices and the extraordinary monetary stimulus from the ECB which has weakened the euro and lifted asset prices are important factors behind the improved outlook. However, uncertainty with respect to the looming default of Greece, including the possibility of Greece finally giving up the euro, remains a risk that could weigh on growth going forward. Also external demand could prove to be weaker than has been anticipated so far, which would limit the pace of recovery in the euro area in the short term.