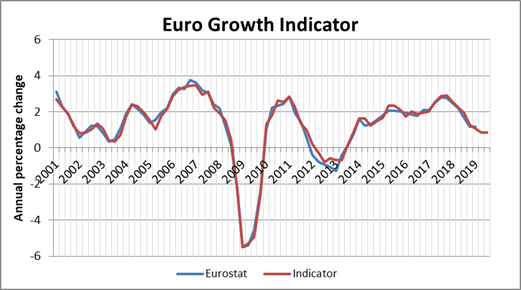 Continued weakness of growth in the euro area

Euro area growth remains sluggish for the time being, according to the July Euro Growth Indicator calculated by the EUROFRAME group of economic research institutes. GDP is forecast to increase by only 0.1 per cent in second quarter of 2019, after the 0.4 percent growth registered by Eurostat for the first quarter of 2019. For the near future no significant pick-up of activity is in sight. The indicator suggests growth of 0.1 percent also for the third quarter. On a year-over-year basis, growth would decelerate to 0.8 per cent in both quarters, down from 1.1 per cent in the fourth quarter 2018 and 2.9 per cent at the end of 2017.

The Indicator estimate is currently dragged down by a significant negative contribution of sentiment in the industrial sector, which affects the Indicator coincidentally. In addition, consumer confidence (lagged by one quarter), which has been relatively robust until the first quarter of this year, is now contributing negatively to the growth rate, albeit only modestly so far. While both elements of the indicator improved slightly in the third quarter compared to the second quarter, the positive impact on the indicator of construction survey results, which impact on the Indicator with a long lag of five quarters, has decreased as well, preventing a noticeable increase of the Indicator estimate for growth from Q2 to Q3.

All in all, the Euro Growth Indicator suggests that the euro area economy continues to lack economic momentum, with little signs of improved outlook for the next couple of months. The modest acceleration of growth in the first quarter proved to be temporary. The economic outlook remains clouded with headwinds from the global economic policy environment, including lingering threat of trade conflict with the US and uncertainties around Brexit, and slower growth in China dominating the picture.