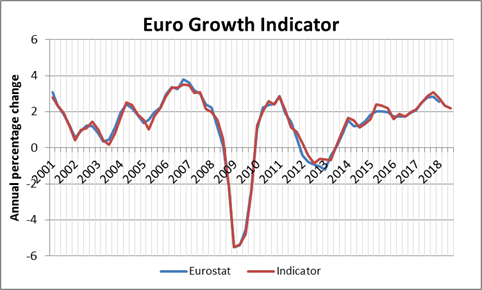 Stable growth in the euro area

Growth in the euro area has slowed down in the first quarter of 2018 from the high momentum that prevailed during 2017, but will not to decelerate further for the time being, according to the July Euro Growth Indicator calculated by the EUROFRAME group of economic research institutes. The second quarter GDP forecast is 0.5 per cent, a notch higher than the Eurostat growth estimate for the first quarter (0.4 per cent), and the estimate of the Euro Growth Indicator for the third quarter now stands at 0.6 per cent. The Indicator estimates for the second and third quarters 2018 have been revised up by 0.1 and 0.2 per cent, respectively. On a year-over-year basis, growth would decelerate to 2.3 per cent in the second quarter, down from 2.5 per cent (Eurostat estimate) in the first quarter and 2.2 per cent in the third quarter of this year.

The uptick in the Indicator growth estimate for the second quarter reflects a stabilization of sentiment in the industrial sector, which affects the Indicator coincidentally, and the fact that the euro has not appreciated further in the course of this year, as the exchange rate enters the Indicator with a lag of two quarters.  The upward revision of the forecast for the third quarter is mainly due to an improvement of confidence of private households (lagged by one quarter) and a notable positive impact of the construction survey results, which impact on the Indicator with a long lag of five quarters.

All in all, the July 2018 Euro Growth Indicator suggests that the euro area economy continues to grow at a decent pace for the time being. While the expansion clearly has lost some momentum, the economy seems to have stabilized at a level of growth that is consistent with further reduction of unemployment and continued increase of total economy capacity utilization, although at a more moderate pace.