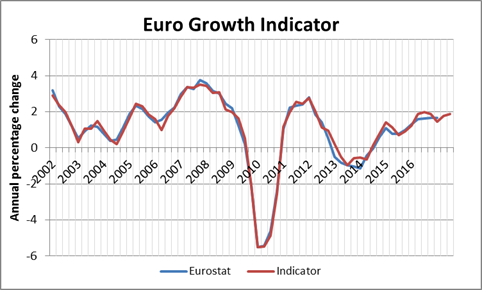 According to the July Euro Growth Indicator calculated by the EUROFRAME group, real GDP should grow by 0.5 and 0.4 per cent respectively in the second and third quarters of this year. The indicator’s estimate for the second quarter has been revised slightly upward, while the estimate for 2016Q3 is unchanged. On a y-o-y basis, these forecasts imply a stronger momentum, rising from 1.5 percent growth in 2016Q1 to 1.8 and 1.9 percent in the second and third quarters, respectively.

Surveys in manufacturing sectors have recovered after a temporary weakness during the first quarter of 2016 related to the financial market turmoil around the turn of the year. However, confidence in industry does not give a significant boost to the estimates in 2016Q2 and 2016Q3. The lack of momentum in industry is one reason for the rather sluggish recovery in the euro area which is not driven by this sector of the economy unlike in past upturns. At the same time, households’ survey results have weakened in the second quarter of 2016 and will contribute negatively to the estimate in 2016Q3. As a consequence, the main impulse to growth since early 2014 is about to fade away. At the same time, the contribution of the construction survey, which enters the indicator with a long lag of 5 quarters, will become almost neutral on average in spring and summer. Lastly, the impact of the real exchange rate on growth remains very weak as the real euro-dollar exchange rate has not changed substantially for almost one year.

All in all, euro area GDP seems to remain on the path of a relatively sluggish recovery experienced since the second quarter of 2013. Many reasons account for this lack of momentum, such as private and public deleveraging pressures and weaknesses in the banking sector in a number of countries despite the strong monetary stimulus from the ECB. Furthermore, the external environment leads to increased uncertainties regarding emerging countries prospects — especially in China — or the risk of a new financial crisis. Uncertainties in Europe have recently also increased due to the popular vote in the United Kingdom for Brexit as it remains unclear when and under what conditions the country will leave the EU, although the potentially negative consequences of such an event for the euro area can hardly be quantified at this stage. It should be noted, however, that the result of the referendum is not yet fully reflected in the July indicator result.