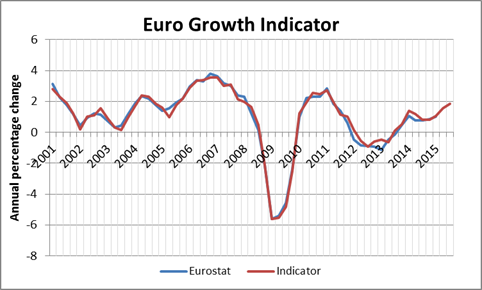 According to the July EUROGROWTH Indicator estimate, GDP growth in the euro area will slightly accelerate to 0.6 per cent in the second quarter of 2015 from 0.4 percent both in the final quarter of last year and in the 1st quarter of 2015. Regarding the second quarter, the estimate is unchanged as compared to last month. The July estimate for the third quarter is revised downwards, from +0.7 percent to +0.5 percent. But at this point, this slightly negative revision does not question the outlook for a recovery: the expansion path in the euro area would remain the highest since the first half of 2011, either on a quarterly or on a year-on-year basis.

Growth is supported by a strong positive contribution from the household sector. The improvement of consumer confidence reflects the effect of both lower energy prices in terms of purchasing power and the gradual but continuous decline in the unemployment rate from the very high level reached in early 2013. A positive contribution of the business climate in the manufacturing sectors is also expected in the second quarter of 2015, but the confidence of firm managers weakened since April, driving again a negative contribution in 2015Q3. At the same time, the effect of the devaluation of the euro against the dollar will support growth more strongly, the lagged effect of the exchange rate peaking in the third quarter of 2015. By contrast the construction survey, which affects growth estimates with a lag of more than one year, is dampening the forecasts.

Clearly, the Indicator suggests that the euro area economy will remain on a recovery track up to summertime. The situation has never been so favourable in terms of external and internal conditions since 2011. On the external side lower energy price and euro exchange rate will support internal and external demand. On the internal side, the massive quantitative easing measures implemented by the ECB should support a recovery in credit markets and stimulate private investment while fiscal consolidation lessened somewhat in member countries. However, the Greek issue is unsettled so far. Uncertainty about an agreement between the Greek government and Greek debt creditors is at its highest level, which could increase volatility in euro area activity in the very short term, as the recent drop in the industrial confidence may suggest.