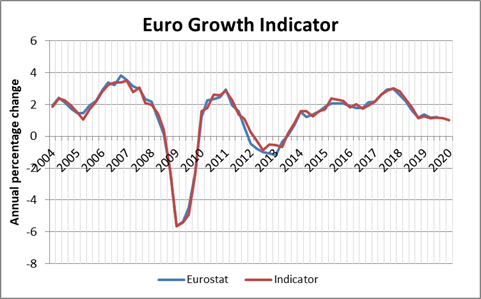 Slightly improved outlook for growth in the euro area

Euro area growth is likely to strengthen somewhat in the beginning of 2020 after another quarter of sluggish growth in the final months of last year, according to the January Euro Growth Indicator calculated by the EUROFRAME group of economic research institutes. GDP is forecast to increase by close to 0.4 per cent in the first quarter of this year, a notch higher than the pace of 0.2 percent that is suggested by the Indicator for 2019Q4 and has been recorded by Eurostat for the second and third quarters of 2019 as well. On a year-over-year basis, growth would stabilise at around 1 per cent in the first quarter.

The improvement in the Indicator for 2020Q1 is mainly due to a stabilisation of confidence in the industrial sector which had been a significant drag on the growth estimate between mid 2018 and the end of last year. The other components of the Indicator have shown little movement: Consumer confidence (lagged by one quarter) continues to impact slightly negatively on the GDP growth rate in both quarters, while the contribution of construction survey results, which plays with a long lag of five quarters, remains positive. A small positive contribution is also coming from the real euro/dollar exchange rate, which enters the indicator calculation with a lag of two quarters.

All in all, the Euro Growth Indicator suggests that the soft patch in euro area growth could gradually be overcome starting in the beginning of this year. With industrial production seeming to have bottomed, for the time being chances have improved that the rest of the economy, which has so far been relatively robust, will remain on track. In that case a serious deceleration of growth that would also negatively impact on total employment should be avoided. However, risks for the outlook still abound, including from higher oil prices as a possible fallout from increased tensions in the Middle East and the lingering threat of trade conflict with the US. Negative surprises could easily lead to a renewed loss of confidence in the industrial sector and derail the budding recovery of growth in the euro area.