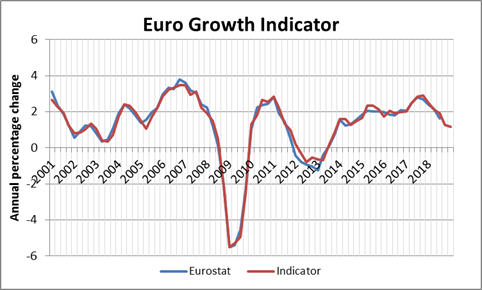 Growth in the euro area to remain muted

Growth in the euro area is expected to pick up somewhat from the low third quarter reading, but remain moderate for the time being, according to the January Euro Growth Indicator calculated by the EUROFRAME group of economic research institutes. GDP is forecast to rise by 0.3 per cent in both the fourth quarter of 2018 and the first quarter of 2019, representing only modest improvement from the disappointing 0.2 percent growth registered by Eurostat for the July-September quarter. While the growth estimate for 2018Q4 is almost unchanged from the December Euro Growth Indicator estimate, the estimate for 2019Q1 has been reduced markedly from previous month’s figure of close to 0.5 percent. On a year-over-year basis, growth would decelerate to 1.3 per cent and 1.2 per cent in 2018Q4 and 2019Q1, respectively, down from 1.6 per cent in the third quarter and 2.7 per cent in the fourth quarter of last year.

The Indicator estimate for both quarters is dragged down by a significant negative contribution of sentiment in the industrial sector, which affects the Indicator coincidentally. Construction survey results, which impact on the Indicator with a long lag of five quarters, by contrast contribute positively to the indicator estimate, although not as prominently as in the third quarter. Also consumer confidence (lagged by one quarter) continues to have a modest positive impact on the indicator in both quarters. The exchange rate, which enters the Indicator with a lag of two quarters, has turned to a slight positive contribution after having affected the indicator slightly negatively in the quarters before.

All in all, while the low growth rate of the third quarter 2018 can to some extent be explained by temporary factors such as problems in the automotive industry following the introduction of the new WLTP test procedures, the January 2019 Euro Growth Indicator is evidence that also underlying growth in the euro area economy has slowed. As potential sources of negative surprises in the coming months have not receded, including a further escalation of international trade conflict and an increasing probability of an unorderly exit of Britain from the European Union, the low growth momentum implies that there is a significant risk that the euro area economy could stall in the months ahead.