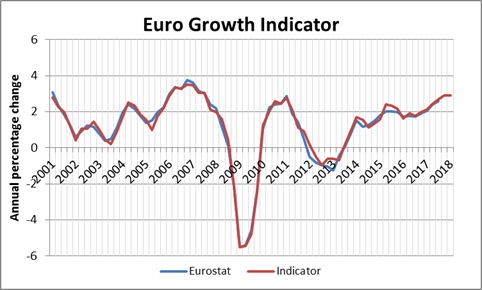 Growth in the euro area has been strong in the last quarter of 2017, and the expansion is expected to remain robust in the first months of 2018, according to the January Euro Growth Indicator calculated by the EUROFRAME group of economic research institutes. GDP is forecast to grow by 0.9 per cent in fourth quarter of 2017, the highest rate of growth in seven years. The Indicator estimate for the fourth quarter is largely unchanged from December, whereas the estimate for the first quarter 2018 has been revised upwards by 0.1 percentage point to 0.6 percent, suggesting that economic growth is moderating only modestly in the beginning of the new year. On a year-over-year basis, growth would accelerate to 2.9 per cent in both quarters, up from 2.1 percent in the first quarter of last year and 2.6 percent in the current Eurostat estimate for the third quarter.

The high growth in the fourth quarter is broad based, with bullish sentiment in the industrial sector contributing strongly, but also significant contributions from a more positive household sentiment, which enters the indicator with a lag of 3 months, and construction survey results, which enter the indicator with a long lag of five quarters. While positive contributions from industry and households are decelerating in the first quarter estimate, construction is continuing to pushing the indicator up. The real euro/dollar exchange rate (lagged by 6 months) is having a moderate negative impact in both quarters as a result of the appreciation in the course of last year.

All in all, the January 2018 Euro Growth Indicator suggests that the economic upturn in the euro area remains on track, with strong growth towards the end of the year and GDP expected to continue to outpace potential growth in the euro area in the coming months.