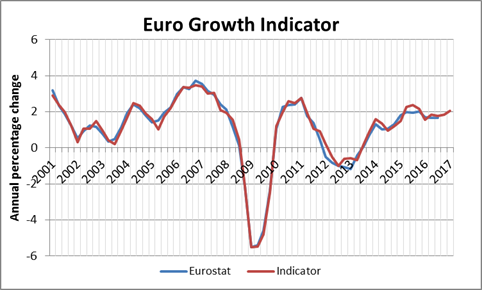 Growth in the euro area seems to strengthen, according to the January estimate of the Euro Growth Indicator calculated by EUROFRAME. The indicator forecasts 0.7 per cent growth in both the fourth quarter 2016 and the first quarter of 2017, following the more moderate rate of 0.3 per cent recorded by Eurostat for the preceding two quarters. The Indicator estimates have been revised up from December by 0.12 and 0.19 percentage points, respectively. On a y-o-y basis this would translate into growth of 1.9 and 2.1 per cent in Q4 and Q1, respectively, compared to growth rates in the range of the 1.8 percent achieved in the summer semester 2016.

The upward revision in the quarterly growth estimates is almost entirely due to a significantly improved economic sentiment in the industrial sector, which affects the Indicator coincidentally. Contributing to the acceleration of growth from the third to the fourth quarter is also an improvement in household confidence, which is entering the Indicator with a lag of one quarter. In both quarters there is a moderate positive impact on growth from a better assessment of the economic situation in the construction sector (five quarters ago). The contribution of the exchange rate is turning from slightly negative in Q4 to slightly positive in the first quarter of this year, reflecting the recent devaluation of the euro against the US-dollar.

All in all, the January Euro Growth Indicator suggests that widely expected negative consequences from the Brexit decision and from uncertainties associated with the change in the US administration will not be visible in euro area growth for the time being. The current benign perception of the economic environment may, however, quickly change given the long list of risks to the outlook which in addition to the aforementioned political uncertainties stem from a variety of factors, including unresolved banking problems in the euro area, financial stress in connection with rising interest rates in the US, or a potential shock to inflation from higher energy prices in response to the OPEC-Russia understanding to cut oil production.