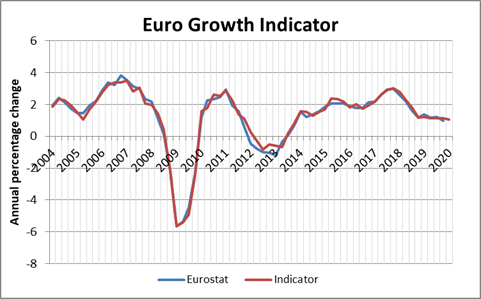 Euro area GDP expected to continue to accelerate to 0.5 per cent in the first quarter of 2020, but…

Euro area GDP grew by a mere 0.1 per cent in the fourth quarter of 2019, according to the preliminary flash estimate released by EUROSTAT on 31 January 2020. This is slightly below the Euro Growth Indicator estimate of 0.2 per cent calculated by the EUROFRAME group of economic research institutes last month.

On a year-over-year basis, euro area GDP growth would remain close to 1 per cent.  However, it should be noted that the indicator uses data and surveys produced before the outbreak of a novel coronavirus was announced in China. Thus, the indicator’s estimate embeds information available at a time when two major downwards risks had receded: first, US-Chinese trade tensions had eased with the signing of Phase One trade deal on 15 January. Second, following the agreement reached on Brexit by the UK government and the EU, and the outcomes of the December 2019 UK general elections, the UK was to leave the EU on 31 January 2020, with a transition period planned to run until the end of 2020. Survey data, especially in the manufacturing sector, suggested a less deteriorated outlook until the end of January. But the outbreak of the coronavirus, a deadly disease, will have substantial negative economic impacts in China and beyond, at least in the first quarter of 2020 and possibly for a longer period of time.