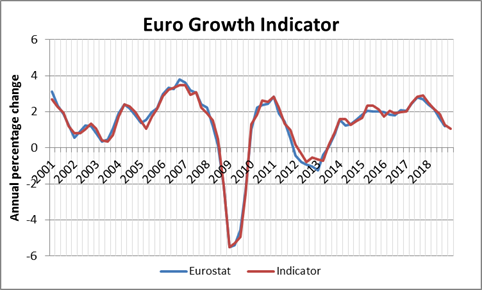 Euro area GDP grew by 0.2 per cent in the fourth quarter of 2018, according to the preliminary flash estimate released by EUROSTAT on 31 January 2019. This is slightly less than the 0.3 per cent growth anticipated by the EUROGROWTH indicator calculated by the EUROFRAME group of economic research institutes. Not all EMU countries have released so far their preliminary GDP estimate for the fourth quarter, but among the larger economies GDP growth continues to vary substantially from one country to another: from a robust 0.7 per cent in Spain, to 0.3 per cent in France, and to a fall by 0.2 per cent in Italy. German GDP growth may still have been dragged down by the implementation of the new EU-wide WLTP (Worldwide Harmonised Light-Duty Vehicle Test Procedure).

On a year-over-year basis, euro area GDP growth would continue to decelerate from its previous peak of 2.8 per cent in the third quarter of 2017 to 1.1 per cent only in the first quarter of 2019. A few downside risks for euro area short-term prospects have receded over the last months: oil prices have decelerated from 80 dollars in September 2018 and stabilised since then at around 60 dollars per barrel for the Brent; Italian sovereign bonds spreads with German bonds have come down since November. But several major downside risks still prevail in the very short-term: the trade dispute between the US and China, and the uncertainties around Brexit, especially of a no deal Brexit by 29 March.