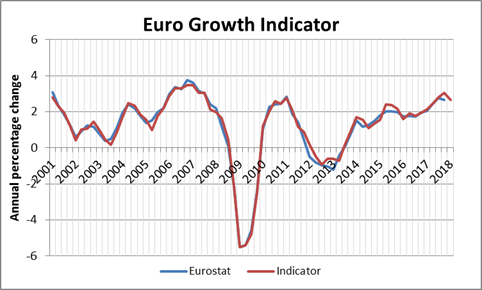 Euro area GDP expected to grow by 0.6 per cent in the first quarter of 2018

According to the Euro Growth Indicator calculated by the EUROFRAME group of economic research institutes, euro area GDP will grow by 0.6 per cent in the first quarter of 2018.  This would be similar to the preliminary flash estimate released by EUROSTAT for the last quarter of 2017.

The Euro Growth Indicator’s latest estimate for euro area GDP growth in the first quarter of 2018 is unchanged as compared to last month, at 0.6 per cent. However, the preliminary flash estimate released by EUROSTAT for the last quarter of 2017 is well below the indicator’s estimate, which suggested an acceleration of GDP growth to 0.9 per cent, reflecting the strength of industrial and households’ confidence in survey data. Indeed, Euro area industrial confidence reached levels last December well above the previous peaks from early 2006 and early 2010, when euro area quarterly GDP grew by close to 1 per cent. Households’ confidence also reached levels well above the pre-2008 crisis levels last December. It may be noticed that euro area GDP growth was revised upwards by 0.1 per cent for the third quarter of 2017 according to latest EUROSTAT figures (from 0.6 per cent to 0.7 per cent), bringing official data closer to GDP estimates produced based on survey data, which could also be the case in the coming months for the last quarter of 2017.

In the first quarter of 2018, the appreciation of the euro vis-à-vis the US dollar since the beginning of 2017 (which plays with a two-quarter lag in the indicator) will contribute to marginally reduce GDP growth, while confidence in the construction sector (which plays with a five quarter lag) will continue to have a positive contribution to growth.  Industrial and household’s confidence will have a less buoyant contribution to GDP growth than in the fourth quarter of 2017, leading to a GDP growth of 0.6 per cent.

Disclaimer: With EUROSTAT having shortened its publication delays for the preliminary flash estimates (now released at t+30), the Euro Growth Indicator calculated by EUROFRAME this month provides a one-quarter ahead forecast only.