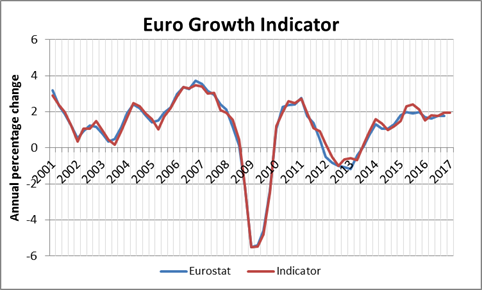 A steady growth path in the near term

According to the February estimate of the Euro Growth Indicator calculated by EUROFRAME, euro area growth will remain solid in the first quarter of 2017. The indicator suggests growth of close to 0.7 per cent in 2017Q1. The Indicator estimate has not been revised from January. However, one may note that the Indicator slightly overestimates Eurostat’s preliminary estimate of 0.5 per cent for the final quarter of 2016 released on Tuesday 31. On a y-o-y basis the indicator’s estimate would translate into growth of 1.9 per cent in 2017Q1.

The steady growth expected in the turn of 2016 and 2017 mainly relies on improved developments in the industrial sectors. Confidence in industry significantly strengthened in December 2016, leading to the highest contribution of the manufacturing sectors to the Indicator since early 2014. Contributing to the acceleration of growth in 2017Q1 is also a better assessment of the economic situation in the construction sector, with a – long – lag of 5 quarters. Nevertheless, households’ confidence, with a lag of one quarter, is not contributing to growth anymore in 2017Q1, after a still positive impact during the previous quarter. The contribution of the exchange rate is turning from slightly negative in Q4 to slightly positive in the first quarter of this year, but the lack of trend of the euro against the dollar has kept the contribution of the exchange rate close to zero since 2015Q4.

All in all, the improvement in the economic climate depicted by business surveys since late 2016 suggests a higher growth path in the near term translating to a close to 2 per cent y-o-y growth rate. For the time being, economic agents seem to remain insensitive to a more risky and uncertain environment, regarding the consequences of the vote for Brexit, the policies to be implemented by the new US administration which could affect the trade relationship of the euro area with the US, the unresolved banking problems in the euro area and higher energy prices and interest rates.