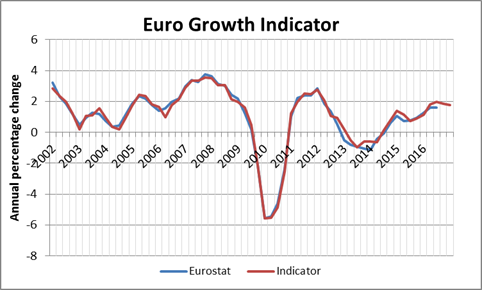 Growth continues rather strong despite instability in the financial markets

Euro area growth is expected to be rather strong in the 2015-2016 winter quarters, according to the EUROGROWTH Indicator calculated by the Euroframe group in February 2016. After 10-quarter-long slow growth period until the third quarter of 2015, the Indicator shows 0.6 per cent growth for the fourth quarter of 2015. The estimate is 0.1 percentage point lower than the estimate in January, while the 2016Q1 estimate is unchanged at 0.5 per cent. In year-on-year terms, the growth rates for the two forecast quarters are 1.9 and 1.8 per cent, respectively.

The rather strong forecast is based on strengthening impacts of consumer and construction surveys, which affect the Indicator with lags of one and five quarters, respectively. The contributions were fairly similar in January. Consumer spending has benefitted from the strong tail winds provided by higher real disposable incomes due to lower energy prices and rising employment.

The industry surveys affect the indicator coincidentally and with a rather large weight. The first quarter impact is based on estimation, which makes this contribution more sensitive to new information than the other contributions. The slow improvement in industry survey contribution stalled in the first quarter of 2016 and turned to a slight decline, probably reflecting the increased financial market turbulence in the turn of the year related to the deteriorated Chinese economic prospects.

The Indicator captures price competitiveness with the USD-euro real exchange rate with a lag of two quarters. Consequently, the weakening of the euro vis-à-vis the USD between spring 2014 and spring 2015 has boosted euro area growth until the third quarter of 2015, but the support has faded with the USD-euro rate having remained relatively stable since spring 2015.

The rather strong growth estimates, in general, are supported by an expected further alleviation of already loose monetary policy by the ECB, less restrictive fiscal policy and still lower energy prices.

All in all, the EUROGROWTH indicator predicts rather solid growth for the euro area for the winter 2015-2016 in spite of recent turbulence in the financial markets, related to uncertainty of the Chinese growth prospects. Obviously, the estimated first quarter industrial contribution may overestimate its true impact on the GDP growth.