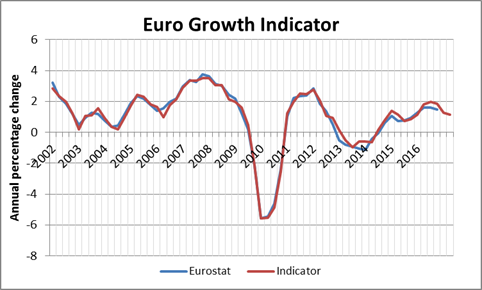 A weaker growth momentum in the euro area

According to the EUROGROWTH Indicator, calculated by the EUROFRAME group in March 2016, growth in the euro area should remain moderate during the first half of 2016. The indicator suggests a 0.3 percent growth both in 2016Q1 and 2016 Q2, after similar figures in the second half of 2015 according to EUROSTAT official figures. The EUROGROWTH indicator outlook for 2016Q1 has been significantly revised downward (by 0.2 percentage point) from the February estimate (+0.5 per cent).  The first estimate for 2016Q2 does not signal any change in the growth path from earlier quarters. On a y-o-y basis, these forecasts imply a weaker momentum, from 1.5 percent in 2015Q4 to 1.1 in 2016Q2.

The downward revision in GDP growth prospects in early 2016 mainly reflects the change in sentiment in the industrial sectors which affects the indicator coincidentally. While there had been some improvement in the industrial confidence indicator until the last quarter of 2015, firms have become more pessimistic in February. As a result, the contribution of the industrial survey turns negative in the first half of 2016, driving downward growth prospects in the first quarter. The other components of the indicator have not changed much from last month. The positive contribution of the real euro/dollar exchange rate up to summer 2015, which with a lag of two quarters captures the favourable competitiveness effect of the depreciation of the euro in the second half of 2014 and in early 2015, has turned back to zero since the last quarter of 2015 and will remain unchanged until mid-2016. This reflects the stabilization of the exchange rate at around 1.1 dollar for one euro since the first quarter of 2015. The positive contribution of the construction survey reflects better developments in the sector started one year ago. But this effect seems very fragile since it will not last in the second quarter of 2016. The only component of the indicator that remains solidly positive is the consumer survey, especially the “major purchases over next 12 months” component, which suggests a robust trend for private consumption, probably driven by the decline in the unemployment rate since early 2013 and the new drop in energy price since summer 2015.

The industry surveys affect the indicator coincidentally and with a rather large weight. The first quarter impact is based on estimation, which makes this contribution more sensitive to new information than the other contributions. The slow improvement in industry survey contribution stalled in the first quarter of 2016 and turned to a slight decline, probably reflecting the increased financial market turbulence in the turn of the year related to the deteriorated Chinese economic prospects.

All in all, the performance of the euro area economy has been somewhat disappointing in recent quarters. The EUROGROWTH indicator, mainly reflecting the confidence indicators developments, overestimated actual GDP growth which decelerated all along 2015 after a rather good start in the first quarter. And the outlook is not as clear as it was a few months ago. The current forecasts imply that the euro area economy will not gain any momentum in the near term. Instead, risks have risen, related to uncertainty of the emerging countries growth prospects and fears of a new financial crisis experienced by financial markets in early 2016. In that light, the recent decline in the industrial sentiment indicator is a worrying signal.