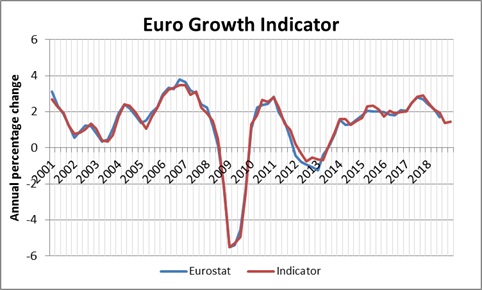 The Euro Growth Indicator, calculated by the EUROFRAME group in November 2018, suggests that euro area GDP growth accelerates to a quarterly rate of 0.3 per cent in the fourth quarter of 2018. This would come after a slightly weaker third quarter GDP figure, which showed 0.2 per cent growth for the euro area, according to the estimate produced by Eurostat. The Indicator implies that the year-on-year growth rate would be 1.4 per cent in the fourth quarter of 2018, a growth rate which is 0.3 percentage points slower than the Eurostat’s estimate for growth in the third quarter of 2018.

The Indicator suggests that euro area growth will speed up in the first quarter of 2019, implying a quarterly growth rate of slightly less than 0.5 per cent for that quarter. This would convert into a 1.4 per cent year-on-year GDP growth, in line with the yearly growth rate estimated for the fourth quarter of 2018.

All in all, the Euro Growth Indicator was slightly optimistic about euro area GDP growth for the third quarter of 2018. However, the slowdown in the third quarter euro area growth was partly due to transitory factors such as new emissions tests that dampened car production, especially in Germany. As a consequence, some rebound can be expected for the fourth quarter 2018 and the first quarter 2019, as the effects of these transitory factors fade out. This is in line with the growth rates suggested by the indicator.