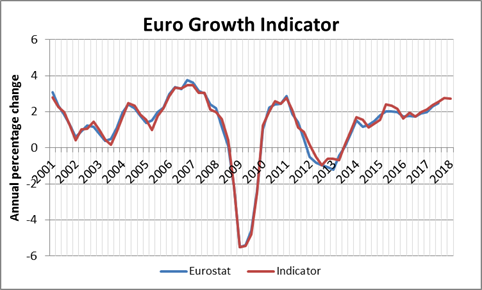 Euro Growth Indicator, calculated by the EUROFRAME group in December 2017, shows that euro area GDP growth will peak before the turn of the year, and it is expected to remain strong also in the first quarter of 2018. The Indicator suggests quarter-on-quarter GDP growth in the euro area of 0.9 per cent, implying accelerating growth in the last quarter of this year from 0.6 per cent in the third quarter according to the Eurostat flash estimate.  The Euro Growth Indicator also implies a year-on-year growth rate of 2.8 per cent for the euro area fourth quarter.

The first estimate of the indicator for the first quarter of 2018 suggests quarterly euro area growth of 0.5 per cent. This implies that growth would decelerate in the coming months but remain robust. The resulting year-on year growth rate would decline only marginally to 2.7 per cent in the first quarter next year.

The strong GDP growth in the fourth quarter is mostly due to an improved economic sentiment in the industrial and household sectors. The construction sector contributes slightly positively to the indicator value, whereas the real exchange rate has a small but negative effect on Euro Growth indicator in the fourth quarter.

To summarize, the fourth quarter GDP growth implied by the Euro Growth indicator is estimated to accelerate, encouraged mostly by the good sentiment in the industrial and household sectors. Even if these two sectors cannot provide euro area with a further positive push in the first quarter of 2018, the expansion in the euro area economy is expected to continue at the beginning of next year, if somewhat less vigorously.