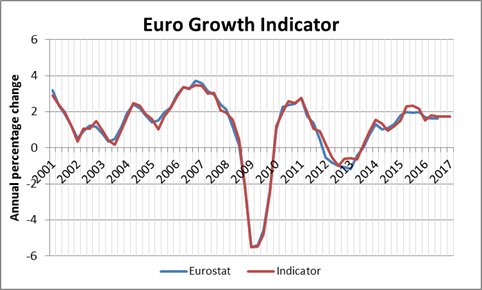 The – modest – recovery in the euro area continues

According to the Euro Growth Indicator, calculated by the EUROFRAME group in December 2016, euro area GDP growth would slightly accelerate in the turn of 2016 and 2017. From the rather moderate growth path experienced in spring and summer, at 0.3 percent per quarter on average, the current forecasts would bring back the euro area economy to more dynamic developments such as one year ago. Quarter-on-quarter GDP growth in the euro area would accelerate to around 0.5 per cent in both the fourth quarter of 2016 and the first quarter of 2017. The December estimate for the fourth quarter of 2016 is close to last month estimate and the estimate for the first quarter of 2017 is the first one run with the indicator. These forecasts imply a rather stable year-on-year growth rate of 1.7 per cent up to 2017Q1. Although this suggests that the recovery will continue, it will remain sluggish as compared with 2005/07, or even 2010/11, without gaining speed for two years.

Most of the components impact positively the indicator on average during the two coming quarters. The manufacturing surveys, which affect the indicator coincidentally, picked up in September after a temporary drop in August. As a consequence, the positive contribution of the confidence indicator in industry will become stronger again in 2016Q4. In 2017Q1, the contribution of the industrial factor could fall back to near zero. However, it should be noted that the 2017Q1 value of the factor, for which no released data is currently available, is estimated and may change as new data are released.

Households’ confidence depicted by the major purchase intentions over the next 12 months, which affect the indicator with one lag, seems to have reached a peak, fluctuating around a flat level since early 2016. As a result, the contribution of this factor, which has been the main source of growth since 2014, fluctuates around zero, from negative in 2016Q3 to positive in the final quarter of this year and then back to zero in 2017Q1.

The rather flat real euro/dollar exchange rate, after the strong depreciation of the euro up to early 2015, reflects in a near neutral contribution during the next two quarters as was the case in the four previous quarters. On the contrary, the construction survey, which enters the indicator with a 5-quarter lag, will affect the indicator with a growingly positive impact, reflecting better developments in the sector one year ago.

All in all, the moderate expansion path of the euro area seems to be fairly stable in the near term despite increasing risks stemming from external and internal conditions of the economy. Although apparent risks to the outlook didn’t materialize so far – negative economic impacts of the Brexit vote, uncertainties regarding emerging countries prospects, weaknesses in the banking sector in a number of euro area countries – the euro area economy remains vulnerable to adverse shocks.