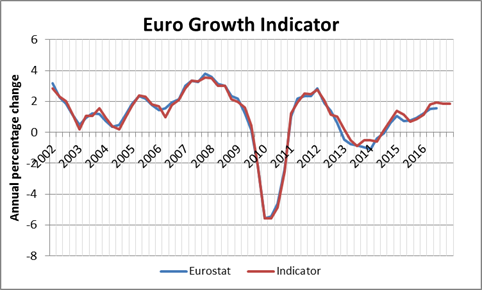 Euro area growth is expected to be strong in the winter quarters 2015-2016, according to the EUROGROWTH Indicator calculated by the Euroframe group in December 2015. The Indicator points to 0.7 per cent growth for the fourth quarter of 2015, which is unchanged from the previous November estimate. The first estimate for the first quarter growth in 2016 is a bit slower at 0.5 per cent. In year-on-year terms, the growth rates for the two forecast quarters are both 1.8 per cent, which would be the strongest growth since the summer of 2011. The estimated quarter-to-quarter growth would extend the current 10-quarter-long stretch of uninterrupted albeit moderate growth to three years. The Indicator has already shown robust growth in the third quarter of 2015, in fact, twice as fast growth as the preliminary 0.3 per cent figure from Eurostat, suggesting some scope for upward revision of the estimate.

The improving outlook forecast by the EUROGROWTH indicator is broad-based with similar drivers to the November estimation. Contribution from construction, which affects the indicator with a lag of more than one year, turned to support growth last autumn and is expected to strengthen during the winter. The impact of the depreciation of the euro vis-à-vis the USD since spring 2014 till April 2015, which affects the indicator positively with a lag of two quarters, peaked in the third quarter and will reduce quickly in the autumn and the winter. The rather strong impact of consumer confidence, which affects the indicator with a lag of one quarter, is slowly diminishing, although still supported by low energy prices and an improvement in the labour markets. Industrial survey data that contributes to the indicator coincidentally is still robust during the autumn of this year, but is forecast to lose some of its momentum early next year.

All in all, the EUROGROWTH indicator predicts solid growth for the Euro area. The rather strong growth estimates are supported by an expected further alleviation of already loose monetary policy by the ECB, while many other factors continue to support robust growth. Low interest rates, weaker euro and continuing low energy prices have stabilised the euro area economy and continue to provide positive tail winds for the time being.  The tragic terrorist attack in Paris in November does not seem to have affected the sentiment of economic agents, though due to the timing of data collection the most recent surveys may not have captured the full impact.