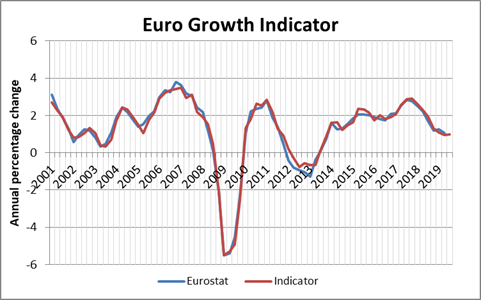 Euro area GDP grew by 0.2 per cent in the second quarter of 2019, according to the preliminary flash estimate released by EUROSTAT on 31 July 2019. This is slightly higher than the 0.1 per cent growth anticipated by the Euro Growth Indicator calculated by the EUROFRAME group of economic research institutes last month.

On a year-over-year basis, euro area GDP growth would remain close to a mere 1 per cent in the third quarter of 2019. A number of negative risks continue to weigh on euro area growth prospects in the short term: the deterioration of the world global outlook, among which world trade deceleration in a context of trade disputes between the US and China, and, in Europe, the deterioration of activity in the manufacturing sector, especially sharp in Germany, while political uncertainties around Brexit have recently increased with Boris Johnson’s government being committed to Brexit by 31 October, ‘come what may’.