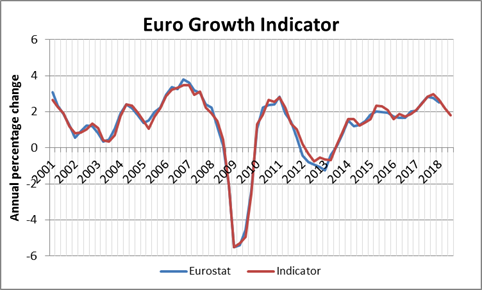 More moderate growth in the euro area, but steady so far

Euro area GDP growth has clearly decelerated from its previous peak of 2.8 per cent on year-over-year basis reached in the third quarter of 2017 according to EUROSTAT figures. On the whole, business and consumer survey data available today, together with the rise of geopolitical risks in recent months already showing in terms of higher oil prices for instance, would rather tend to suggest a slight deceleration of GDP growth in the second half of 2018.

Disclaimer: With EUROSTAT having shortened its publication delays for the preliminary flash estimates (released at t+30), the Euro Growth Indicator calculated by EUROFRAME this month provides a one-quarter ahead forecast only.