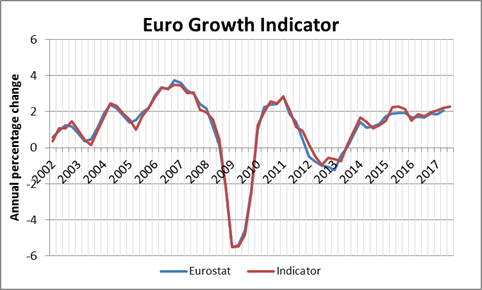 The slight deceleration of euro area GDP growth will be mainly due to a less buoyant industrial sentiment. The appreciation of the euro-dollar exchange rate since the beginning of the year (playing with a two-quarter lag in the indicator) would also start to bite and reduce marginally GDP, as would a slight degradation of the consumer sentiment. These negative contributions to GDP growth would be partly offset by an improvement from the construction sector side.

All in all, the Euro Growth Indicator suggests that the recovery in the euro area economy will remain on track this summer, at least as depicted by survey data. On a year-over-year basis this would translate into growth of close to 2.3 percent in the third quarter, up from 2.1 percent for the second quarter according to the latest Eurostat estimate.

Disclaimer: With EUROSTAT having shortened its publication delays for the preliminary flash estimates, the Euro Growth indicator calculated by EUROFRAME provides a one-quarter ahead forecast only.