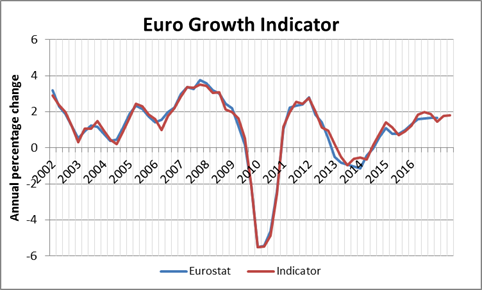 The Euro Growth Indicator, calculated by the Euroframe group in August 2016, suggests an acceleration of GDP growth in the third quarter of 2016 both in comparison to the second quarter and to the previous estimate in July. Quarter-on-quarter GDP growth in the euro area would accelerate to 0.6 per cent in the third quarter, up by 0.1 percentage points from July’s indicator value.  The implied year-on-year growth rate would be 1.8 per cent.

The Indicator shows a rather robust 0.5 per cent growth rate for the second quarter in quarter-on-quarter terms which is higher than the preliminary flash estimate of Eurostat of 0.3 per cent.

The acceleration of GDP growth in the third quarter is based on the improvement of industrial expectations, which affects the indicator coincidentally. The contributions of the other factors, which affect the indicator with various lags, were unchanged and weak in the third quarter. The household factor, which has been a major factor of growth since 2014, turned negative and contributions of the USD-euro real exchange rate and construction surveys were flat, close to zero.

The acceleration of euro area GDP growth in the second and third quarters of 2016 is based on the improving contribution of the coincident industrial factor. Note, however, that the third-quarter value of the factor is estimated and will change, if the industrialists’ expectations will change in September. The GDP estimate will then also change. Particularly, the generally expected negative output effects of Brexit may still be in the pipeline, or Brexit may have decelerated otherwise strong GDP growth.