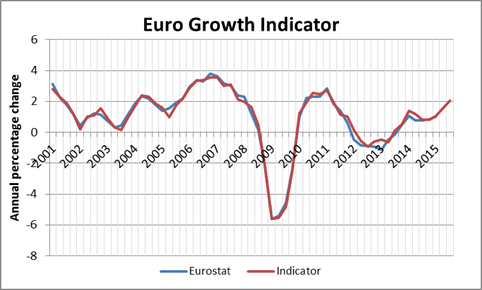 Euro area growth is strengthening in the course of this year according to the EUROGROWTH Indicator calculated by the EUROFRAME group in August 2015. GDP growth has accelerated slowly on quarter-on-quarter basis from a modest 0.2 per cent in the summer of 2014 to 0.4 per cent in the first quarter of this year. The indicator points to a further acceleration of growth to 0.6 and 0.7 per cent in the second and third quarter, respectively. The estimated growth rates are the highest since winter 2010/2011. The third quarter estimate was raised by 0.2 percentage points from the July estimation, while the second-quarter estimate was unchanged. On a year-on-year basis, the growth estimates for the second and third quarters are the highest since the spring of 2011 at 1.5 and 2.1 per cent, respectively.

The improving outlook indicated by the EUROGROWTH indicator is broad-based, supported by a strong contribution from households and strengthening contributions from industrial managers’ confidence and price competitiveness. Consumer confidence, which affects the indicator with a lag of one quarter, benefited from low energy prices and some improvement in the labour markets. The growth impact from improved price competitiveness, captured by the USD-euro real exchange rate with a lag of two quarters, has strengthened this year and is expected to peak in the third quarter of 2015. Industrial survey data that contributes to the indicator coincidentally is negative from the second quarter of 2014 up to the first quarter of 2015, but turns positive in the second quarter, improving the growth estimates. It is only the impact of construction sector confidence, affecting GDP with a lag of five quarters, which drags down growth in the second and third quarters of 2015.

Clearly, the EUROGROWTH indicator predicts rather solid growth for the Euro area in the course of 2015. Surprisingly, the deep difficulties in resolving the Greek insolvency have had no clear effect on the confidence of economic agents apart from weaknesses in the confidence in early summer. Instead, the massive unconventional bond-purchasing programme by the ECB, low interest rates, a weaker euro and continuing low energy prices, together with improved tools to take care of liquidity crises in the euro area, have stabilised the development. However, the possible setbacks relating to the economic and political development of Greece and a possible adverse development of the crisis in Ukraine remain risks that could lead to a deterioration of the outlook in the months to come.