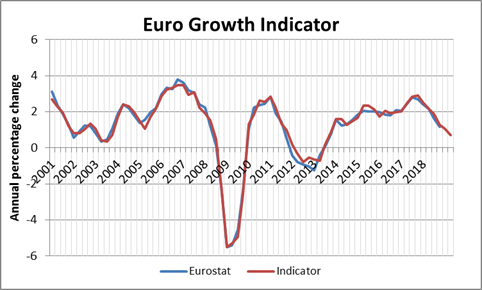 Sluggish growth in the euro area

The euro area remains in the Doldrums for the time being, according to the April Euro Growth Indicator calculated by the EUROFRAME group of economic research institutes. GDP is forecast to rise by 0.3 per cent in first quarter of 2019, marginally up from the modest 0.2 percent growth registered by Eurostat for the third and fourth quarters of 2018. The indicator estimate for the second quarter is suggesting even slower growth of only 0.1 percent. On a year-over-year basis, growth would decelerate to 1.0 per cent and 0.7 per cent in 2019Q1 and 2019Q2, respectively, down from 1.3 per cent in the fourth quarter 2018 and 2.9 per cent at the end of 2017.

The Indicator estimate for the first two quarters of 2019 is dragged down by a significant negative contribution of sentiment in the industrial sector, which affects the Indicator coincidentally. In the second quarter, a decline in consumer confidence (lagged by one quarter), which had had a modest positive impact on the indicator in previous quarters, adds to the weakness. Construction survey results, which impact on the Indicator with a long lag of five quarters, and the exchange rate contribute positively to the indicator estimate in both quarters, although only to a moderate extent.

All in all, the Euro Growth Indicator suggests that the euro area economy remains in a soft patch for the time being, with little signs of improved outlook for the next couple of months. Thus the Indicator does not support the view that the low growth in the recent quarters has been to a large extent due to temporary factors. According to this view, growth would recover soon as the transitory problems such as in the automotive industry following the introduction of the new WLTP test procedures, bottlenecks in some German industries due to extremely low water levels in river Rhine, or the negative impact of civil protests on output in France fade. Instead the Indicator suggests that the slowdown in the euro area economy is more fundamental, possibly linked to weaker growth in the global economy and increased political uncertainty stemming from lingering international trade conflicts and Brexit.